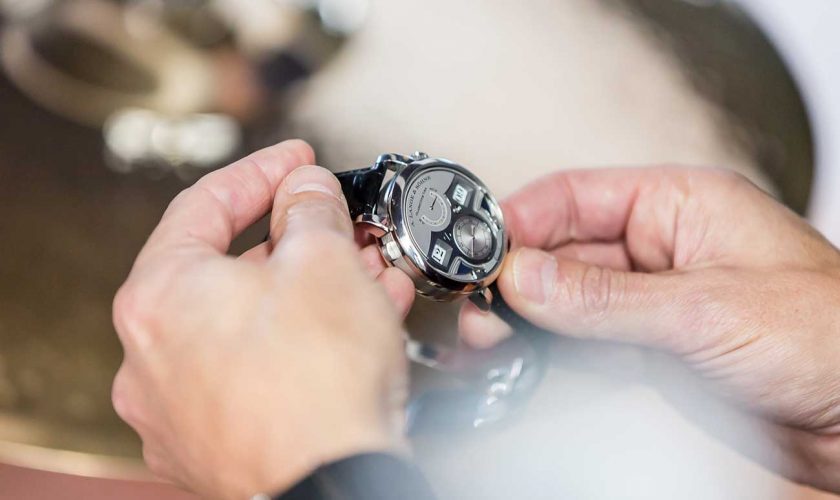 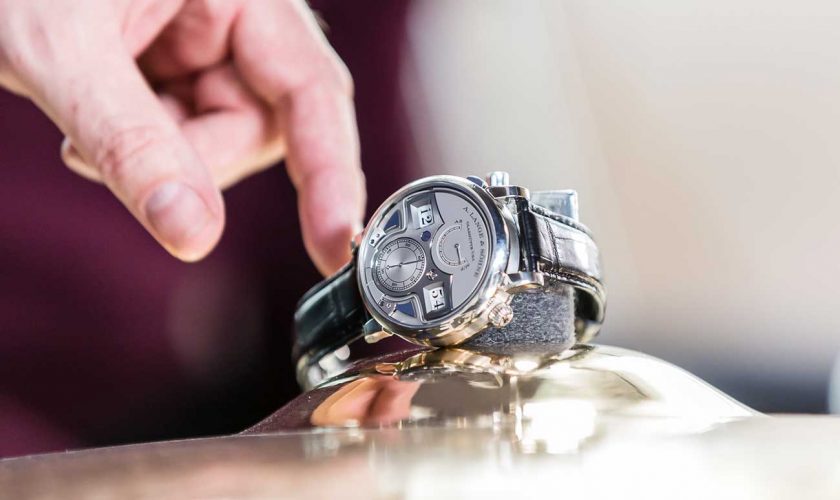 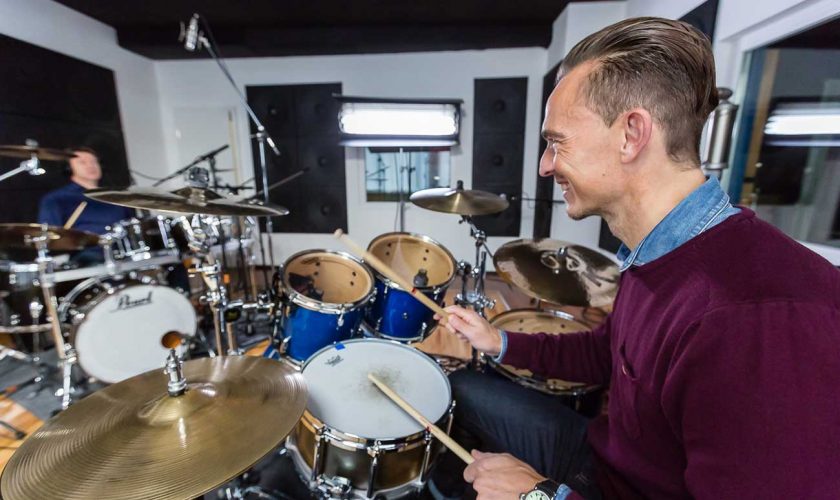 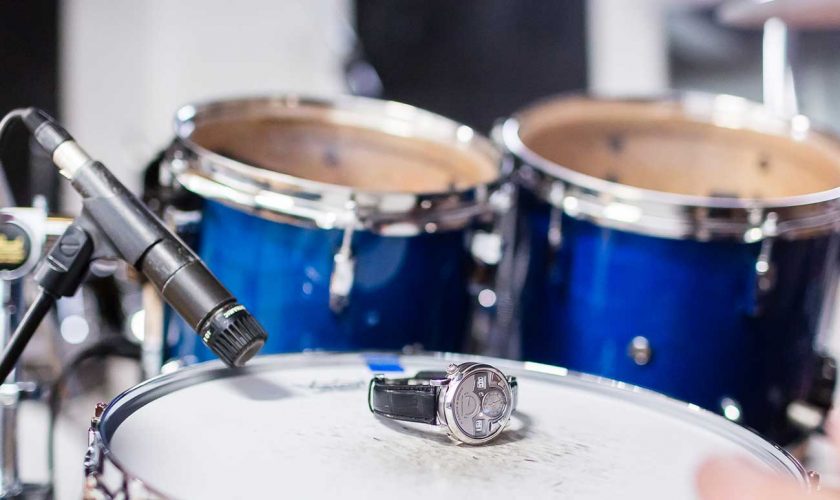 The Zeitwerk Minute Repeater by A. Lange & Söhne is a watch with ‘soul’. Everything about the watch is idiosyncratic and that results in a unique rhythm and sound. The brain behind this ultra-complicated creation is Tony de Haas. Apart from being the Director of Product Development at Lange the Dutchman is also a passionate drummer. Together with Tony, two drum kits and, obviously, the Zeitwerk Minute Repeater, we hit the studio for a unique, rhythmic and rocking report.

A minute repeater is a highly complicated entity. It is a search for the ultimate balance between tone and rhythm, and the materials used play a crucial role in the end result.

Tony de Haas picks up the watch that lies on the floor next to his hi-hat pedal and gives it to me. I assumed that the watch, which was lying around so casually, would be a Lange 1 or something like that. But nothing proves to be less true. The watch Tony gives me is the star of the show, the incredible and incredibly expensive Zeitwerk Minute Repeater. Tony bursts out laughing at my shocked reaction and quickly moves on to the order of the day, tuning his large drum set. Rock ’n roll Lange style. The drums and cymbals form a link to the decimal minute repeater from Glashütte, because a wooden drum sounds different than a brass one, in the same way that a minute repeater watch with a platinum case sounds different than one in rose gold. Incidentally, there is a drum kit waiting for me as well – the former kit of Golden Earring drummer Cesar Zuiderwijk, a friend of Tony’s – and that means that we are soon jamming loudly and improvising different rhythms. Just grooving and enjoying a mutual passion. When we have finally wiped the sweat from our brows and silence has returned to the studio, we can start the interview – sitting opposite each other, each of us on a drum stool. We are sticking to the theme.

“In a minute repeater it’s not only about the sound, it’s also about the rhythm in which the time is sounded”, Tony explains, drumsticks in hand. “You don’t want to rush it. If the time is sounded too quickly (he beats a quick riff on one of the cymbals to illustrate) it’s not only difficult to tell exactly what time it is, it doesn’t do the tone any favours, either. A minute repeater is a highly complicated entity. It is a search for the ultimate balance between tone and rhythm, and the materials used play a crucial role in the end result. Although I have to say that the common opinion that a minute repeater should really be made of titanium for the best possible tone is nonsense, in my opinion. There are many other factors that determine the ultimate tone. When we presented the Zeitwerk in a platinum case people immediately started to criticise. Not loud enough, too shrill, you name it. The tone of platinum is extremely pure and that is why we deliberately chose that material. However, the comment that the watch isn’t loud enough seems a strange argument to me. There is no more intimate watch than a minute repeater that discreetly whispers the time into its owner’s ears. A watch with minute repeater only has to tell the time to the person wearing it, not the entire pub.

Anyway, the platinum case was a bit of a challenge, also because it had to be water resistant. Why? We are Lange and we like to make things as hard on ourselves as possible, ha ha ha. Which is also why we’ve been working on this for quite some time. It’s not just the material that’s important, the shape of the case also plays a role in the acoustics, and the same applies to the way in which the gongs are attached to the case. And then there are the gongs themselves. They have taken 18 months of research. We opted for hardened steel for the gongs and for the hammers. There must be a balance between the gongs and the hammers; the right thickness for the gongs and the right weight of the hammers. And then there is the shape of the hammers, the force with which the hammers strike the gongs and whether they obstruct the resonation of the gongs after the strike. In that respect it’s just like hitting a drum with a drumstick. The materials chosen for the stick and the drum play a role, the speed at which the stick hits the drum head, the thickness of the membrane, the shape of the tip of the drumstick and the material of that tip.” Tony demonstrates some of this by hitting a drum. When he pulls away the stick after hitting the drum, the drum resonates beautifully and deeply, but if he leaves the stick touching the skin after hitting the drum the sound is short and dull. The difference is very clear.

Incidentally, it’s thanks to Tony de Haas that A. Lange & Söhne makes watches with repeater movements. As a boy Tony wanted to be a professional drummer but on his parents’ advice he chose a career in precision mechanics after which he accidentally ended up in the even more precise mechanics of the mechanical watch. The movements fascinated him so much that he eventually started working for IWC in Schaffhausen and his talent earned him a place at Renaud et Papi. When working for these complication specialists he got involved in repeater movements and in 2004 he started using all his accumulated knowledge and enhanced talent at A. Lange & Söhne. “In those days an essential complication was missing from the collection,” Tony explains, “namely one that sounded the time. Neither was there anyone with knowledge of minute repeaters or grande sonneries. In 2013 we introduced the Grand Complication with grande sonnerie, petite sonnerie and minute repetition, and the digital Zeitwerk is now available as the Striking Time and the new Minute Repeater. The way to look at it is this: such complications are missing in the history of Lange, so we are busy making the history of tomorrow.” But enough talk. Tony runs his sticks over his drum kit and I join in. Lange is so rock ’n roll!

The Zeitwerk Minute Repeater combines the individualistic digital time display with a minute repeater that doesn’t chime the time in quarter-hours but in decimals. This is a rare combination that looks very logical. Contrary to a traditional dial the digital time does not give a spatial overview of the time as it was and where it is going, but only tells you the time right now. The functional aspect has advantages as well, because for just about anyone it’s easier to count and add in decimals than to have to think about the number of quarter-hours and then add individual minutes. Each hour is sounded with a low tone, a double tone subsequently announces each lapsed 10-minute period and a high tone chimes the remaining minutes. A watch with minute repetition will normally use a slider system that charges the system whilst being operated. The Zeitwerk Minute Repeater comes to life with the push of a button. Very elegant, but much more complicated from a technical point of view. Partly because of this the hand-wound calibre L043.5 needs a total of 771 components to display and sound the time. Incidentally, a ‘constant force’ anchor escapement is also used to harness the significant force from the main spring. The movement further stands out for its smart details, like a system that deactivates the crown when the minute repeater is in operation to prevent damage to the delicate mechanism. The 44.2mm case is made of platinum, the dial of solid unprocessed German silver (this is an alloy consisting of copper, nickel and zinc) and the gong hammers are made of black polished steel. The price is 440,000 euro.

Visiting the Rolex headquarters: report from the Oyster 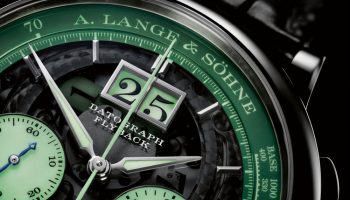 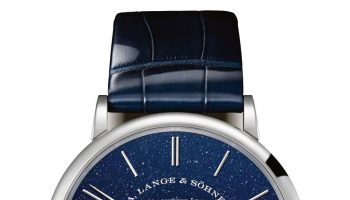 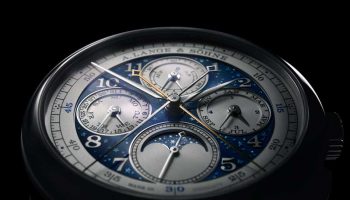 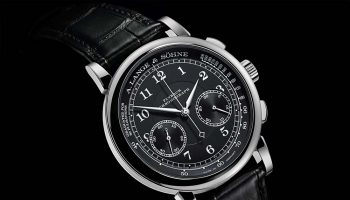 Watchmakerscraft in a new light