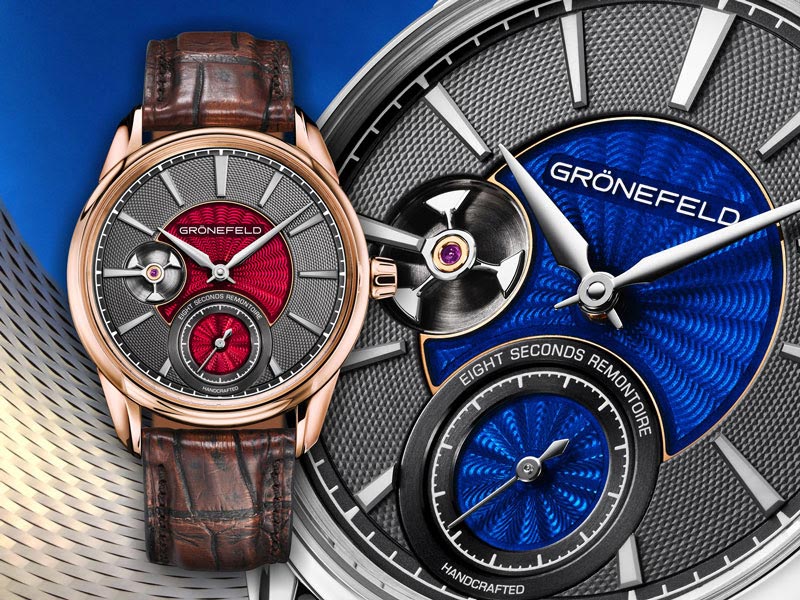 The bespoke series of the Grönefeld 1941 Remontoire gives the spoiled watch aficionado a chance to be even more exclusive than before. On the inside the 1941 Remontoire is a complicated beauty and the new bespoke version are evenly complicated on the outside.

When writing about Grönefeld watches you normally start with the movement and its technical complexity. Not this time. The Grönefeld 1941 Remontoire is now available in a bespoke series and the tailor-made aspect of the watch doesn’t concern the inner workings but its exterior. Keyword of the bespoke series is ‘enamel’.

Enamel is glass, not paint, it does not fade under ultraviolet light and will keep its lustre for years, decades or even centuries to come. And it’s very complicated to produce the perfect watch dial. Luckily the Grönefeld brothers Bart and Tim found specialist Inès Hamaguchi. She is responsible for the delicate enamelling of the dials. To create the aesthetic effect desired, Inès mixes the basic ingredients for the enamel herself. She grinds glass and metal oxides to obtain these exceptional colours. The substrate melts by firing, usually between 750-850° C. The powder melts, flows, and then hardens to a smooth, durable vitreous coating on the engine turned pattern. After cooling, the surface gently needs to be ground down and polished to obtain a flat and translucent surface.
As you know images often don’t do justice to hand decorated timepieces. The extensive and elaborate hand finishing is done for only one thing: to please the eye of the beholder, not the watch fan looking at a computer screen or a much smaller smartphone. On a screen the surface of the dial which is decorated either matt, grained or polished, doesn’t come across. The fine structural detailing is only properly visible when the watch is in motion. Only then the extended workmanship that has gone into a bespoke Remontoire is visible in the countless reflections of light.

Underneath the various enamel dials the movement has stayed untouched. The 39,5mm 1941 Remontoire is equipped with an 8-seconds constant force mechanism, meaning that the force never fluctuates no matter the main spring is fully wound or almost unwound. The amplitude and rate will remain constant, keeping the watch’s precision. The mechanism (basically a small extra hairspring) is being wound and released every 8 seconds, so 10,800 times a day. Do the math and that leads you to close to 4 million actions of the remontoire system per year.
Caliber G-05, the movement responsible for powering the 1941 Remontoire, is made with 258 parts and has a power reserve of 36 hours (with constant force that is). Bart and Tim Grönefeld created a gorgeous looking movement with hand polished and bevelled steel bridges, micro-blasted centre circular graining a relief engraved Grönefeld logo.