0024 WatchWorld looks back to the past, when innovative watches were being created that proved to have great influence on the development of the watch industry. We follow the trail of these milestones by reminiscing with the use of old advertising campaigns. In this twelfth episode we would like to take you back to 1935, when Sir Malcolm Campbell was setting speed records in his Bluebird, wearing a Rolex Oyster on his wrist.

World’s record speeds are decided by fractions of a second. Tuning a car for a world mark is therefore a battle against time. To win, you must have a combination of a perfect car, the right course and favourable weather. And I am going to add another requisite-luck, which always plays a large part in such undertakings. By luck I mean what Americans call having the ‘breaks’. Daytona Beach, Florida is the only place I know where it is possible to make world’s land-speed records. The sand packs almost as hard as cement, and there is sufficient length to get up to speed.” – So said Sir Malcolm Campbell in May 1932.

The English weekly magazine Punch featured this Rolex advertisement on 25 September 1935. The advertisement is way ahead of its time. It shows Sir Malcolm Campbell (1885- 1948). This Englishman lived for speed and speed made him world famous. He started his career at the start of the 20th century as a speed demon on motorbikes and switched over to automobiles in 1910. He named his racing car, which he raced at the famous Brooklands Circuit, Bluebird. This was because after watching a play entitled ‘The Blue Bird’ by Maurice Maeterlinck in the Haymarket Theatre, he decided to paint his road rocket blue.

In the First World War Campbell served in de Queen’s Own Royal West Kent Regiment and in the RAF, and after the war he made his name by setting many speed records on land and water. Incidentally, Campbell didn’t just go very fast in a straight line, he also took part in various motor races. For example, in 1927 and 1928 he won the Grand Prix de Boulogne in France, behind the wheel of a Bugatti T37A. 484.955 km/h Back to the advertisement. In it, we see Sir Malcolm Campbell as a brand ambassador. A kind of George Clooney, or better still, a kind of Ayrton Senna. He is seen as a man who evokes an emotion, tells an appealing story, gives the brand emotional gravitas. Although in 1935 a mechanical watch was still a purely functional instrument and marketing was in its infancy, Rolex still understood that its water and dust resistant Oyster – the first Oyster model had been introduced in 1926 – could be sold that much more easily by talking about the unlikely adventures the watch was able to withstand without a hitch. However, Sir Malcolm did not get the Oyster on his wrist free from Rolex. Two years earlier Rolex had also conducted an advertising campaign with Campbell, but gentleman Campbell would not accept payment from Rolex for wearing the Oyster. He preferred to pay for his Rolex himself. A simple matter of principle.

The telegram-style advertisement we are showing here appeared three weeks after Campbell attained his last land speed record, at the Bonneville Salt Flats in Utah on 3 September 1935. He was the first individual to do in excess of 300 mph in a car. The record he set was an average of 301.337 mph (484.955 km/h) over two runs. Now that he had conquered solid ground Campbell took to the water. He developed a boat which, quite surprisingly, he called Bluebird as well. He set a total of four water speed records, the highest speed being 141.740 mph (228.108 km/h) in the Bluebird K4. He died an atypical death for such a born speed merchant. He had been the fastest in the world on four wheels and on the water, but contrary to many of his record-chasing colleagues his life did not come to an abrupt end in a fiery explosion. Campbell gradually started slowing down until, on 31 December 1948, he passed away at the age of 63 after a series of strokes. 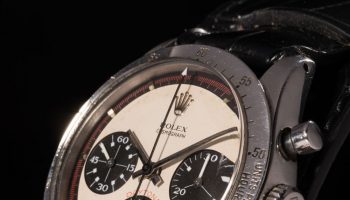