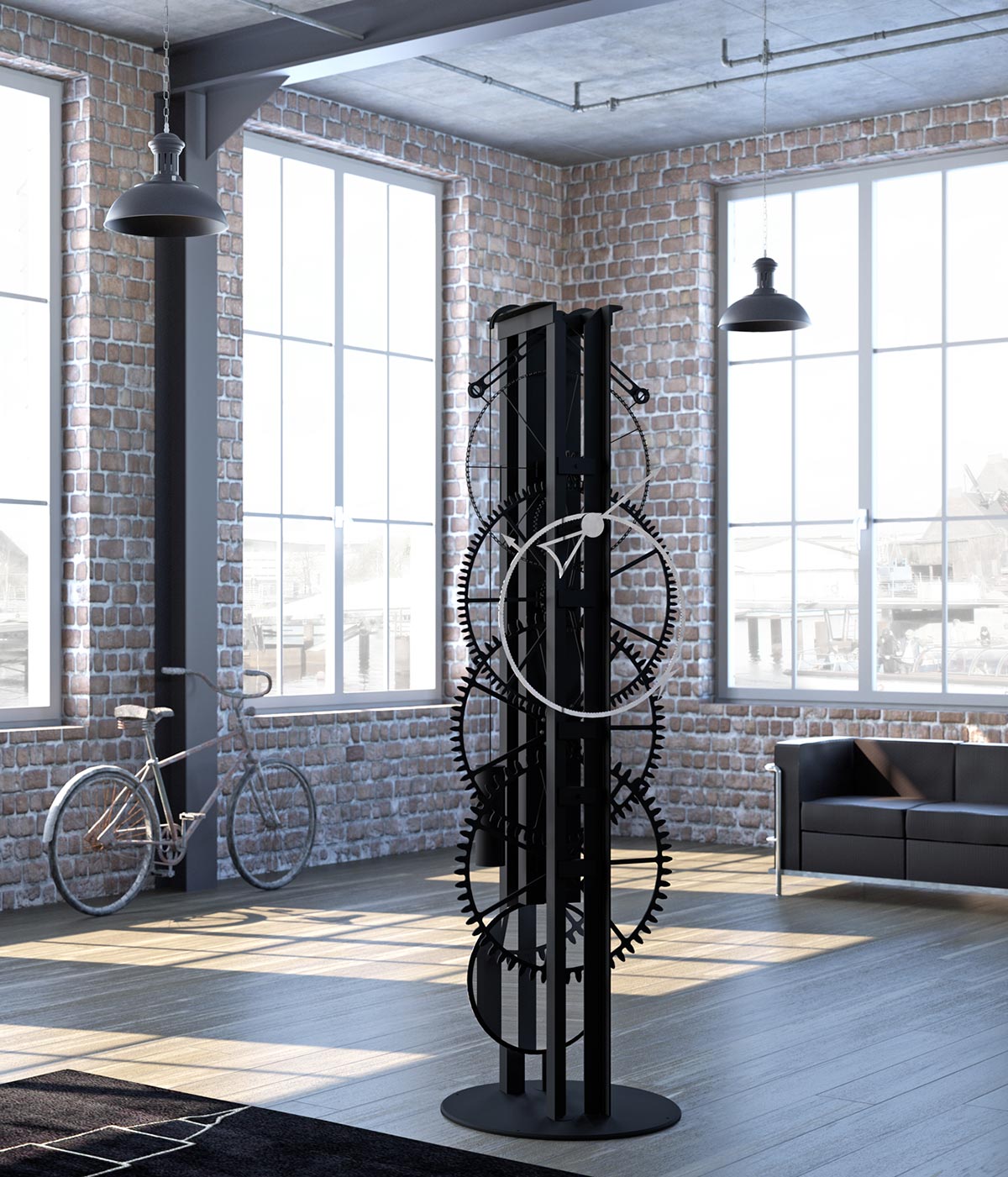 Tick-tock. Tick-tock. The rhythmic swing of the long pendulum paired with the steady tempo of the Time Machine mechanism fills the air with harmonic sounds – a melody orchestrated and invented by artisan Florian Schlumpf. The MB&F M.A.D.Gallery is proud to present an installation of impressive kinetic art pieces designed and developed by Schlumpf, an expert engineer with a passion for art and mechanical precision.

“I was always fascinated by machines that generate a rhythm” Florian Schlumpf says. “A rhythm without time does not exist. A simple pendulum is such a machine: it fascinates by its movement, by its gentle sound. The slower the rhythm, the more soothing its impact is on our emotions.” The goal, therefore, is necessarily not to measure time, but to be more mindful and meditative of its passing.

Schlumpf uses his art to explore his interest in clocks and precision mechanisms, and perfect function is of the utmost importance to him. He achieves this through the design and development process taking place in his Swiss workshop, which is primarily guided by his intuition. Both an engineer and an artist with degrees in both fields, he has been creating installations exploring time and space since 1980. This curated collection of Time Machines encompasses the ideals of the MB&F M.A.D.Gallery with horological and kinetic aspects sure to stimulate the senses.

The Time Machines collection consists of three compositions celebrating the mechanical precision and sensory pleasure of a traditional clock in a purely artistic manner. Each variation, from the TM2 and TM3 to the Wall Machine, exposes the inner workings of the clock mechanism and places the motion of each gear, spring, and axle in the spotlight. In addition to the skeletonized appearance, the Time Machines are hand-finished in eye-catching colour palettes of black, silver, copper, or gold, which enhance their modern architecture. Whether standing on its own or hanging on a wall, each kinetic sculpture transforms a space both visually and audibly.

The statuesque TM2 model (see opening image), rooted on a disk-shaped floor plate, stands more than two meters tall (6.5 feet), elongated by a steel frame bringing its total weight to an impressive 80 kg. This dominant vertical structure features a timing mechanism consisting of four pairs of gears and an escape wheel measuring an incredible 500 mm in diameter. The meditative swing of the TM2’s pendulum remains in operation for a week without a fresh injection of energy.

The TM3, smaller in size, runs for eight days driven by double spiral springs and axles supported by ball bearings with non-contact seals to reduce friction. This piece also incorporates patent-pending anchor arms built with spring-loaded technology providing smooth, almost silent operation requiring minimal energy. The suspension system transforms the kinetic energy of the movement to the spring so that very little power is wasted. Due to its light aluminium structure, TM3 weighs only 10 kg while measuring 1.3 meters (4.25 feet / model “Kaspar”) or 1.8 meters (6 feet / model “Johann”). It can also be mounted on a wall or display as a standing art piece.

The dynamic Wall Machine by Schlumpf creates a dramatic visual into the universe of time by virtue of its size. Measuring approximately 2.1 x 2.2 meters (6.9 x 7.2 feet), the bold, black filigree frame houses black and golden anodized gears contrasting with a mirror-polished golden pendulum disk and hands. A striking component is the large 1.8-meter (5.9 feet) orbital drive. An anchor beam rotating around the central anchor wheel provides constant movement. Although the isochronal sounds of the clock are alluring, the escapement uses spring-like anchor pallets, which produce smooth, virtually silent, transitions. These models feature hands indicating seconds, minutes, hours, and day of week. Sit back, watch the mesmerizing movement, listen to the sound of the pendulum, and contemplate the passing of time. Each kinetic sculpture provides an opportunity to perceive time by more than just marking the passage of hours, minutes, and seconds. A patient observer can digest unhurried intervals of time by focusing on the sound and motion of the animated clocks. If you dare, opt for the purest expression of this concept with a Time Machine that offers no time indication at all and relax to the endless ticks and tocks of time passing.

An idea becomes a reality through swift and proven process, thanks to a well-appointed workshop and a skilled team located in the quaint Swiss town of Trimmis. To begin, every Time Machine undergoes an experimental trial to test its technical integrity; it needs to be deemed reliable and dependable for an unlimited life expectancy. Schlumpf explains his reasoning for this step, “I have the choice to make calculations over and over, however I personally prefer to use testing, making prototypes that offer quick monitoring of results under real conditions,” explains Schlumpf. “For me, intuition combined with experience is often a better counsellor than the results of a long calculation process.”

The second step is to measure out the area that the kinetic sculpture would occupy, whether large or small, which is often combined with an additional test. The final prototype is then assembled by hand with parts manufactured in-house or purchased through suppliers. After finishing the construction of a first unit, a test run begins; and lasts several weeks to a few months, depending on the complexity of new components. Once the test results meet Schlumpf’s strict standards, the Time Machine is approved and ready for production at the manufacture. Ironically, through the course of development there seems to be only one hurdle for Schlumpf: time.

As a child, Florian Schlumpf was inspired by his great-grandfather, Johann Melchior Schlumpf, a skilled carpenter who also worked in a range of fields including hydraulics and electricity from a mechanical workshop in the small Swiss village of Steinhausen. Using his inventive talents, he powered the transmission belts in his workshop by the river flowing past his house and also invented a hydraulic ram, a type of self-driven water pump. One hundred years later, Schlumpf’s fascination with mechanical engineering grew stronger and stronger, eventually developing into a promising future shaped by his innovative great-grandfather. His career path began when he graduated from Lucerne’s art school in 1980 as a sculptor. After travelling the world for two years on a self-made motorcycle, he decided to further his education in the field of mechanics and attended Zentralschweizer Technikum in Lucerne, earning a diploma in mechanical engineering in 1988.

Following a short stint as an engineer at a big paper mill, Schlumpf decided to start his own workshop developing and building custom gearboxes for bicycles and hydraulic pumps, then in 1988 he founded Schlumpf Innovations. “Every innovative product I developed in my life arose from a problem for which no solution existed,” Schlumpf explains. One innovation was derived from a personal experience. “When I climbed a steep mountain pass with my old bicycle and was forced to dismount because there were no gears low enough for pedalling all the way, I suddenly had the idea for the ‘mountain drive’ bottom-bracket gearing system.”

Ten years later, Schlumpf developed a hub for unicycles which is in use by the world’s top unicyclists in races to reach speeds of 40 km/h and more, as well as unicycles for daily commuting. In 2011, the patents and production rights of the bicycle gearing system were acquired by the German company Haberstock Mobility, opening the door to new opportunities for Schlumpf Innovations and allowing Schlumpf to explore his interest in clocks and precision mechanisms resulting in the release of the TM1, a re-imagined classic mechanical clock. The TM1 was introduced at Baselworld in 2014 as a purely artistic experience with no indication for time.

In the same year, Schlumpf worked with the Russian Pedrodvorets Watch Factory to develop and build a monumental clock with a twelve-meter-long pendulum and cogwheels up to four meters in diameter for the traditional Moscow Detski Mir Warenhaus. This project unveiled many new technologies, one of them being the orbital drive, which allows the entire clockwork to move steadily, with only the anchor wheel stopping intermittently so as to preserve the kinetic energy of the movement.

Schlumpf installed a Four-Quadrant Time Machine at Baselworld 2015, which stood in the inner courtyard of the famous watch and clock fair, another monumental installation, five meters tall and big enough to walk through, inviting the visitor to listen to the magical sound of four identical but non-synchronous Time Machines. The visitor could also watch the movement of 24 wheels rotating steadily, with only the anchor wheels being stopped and released by the pendulum. 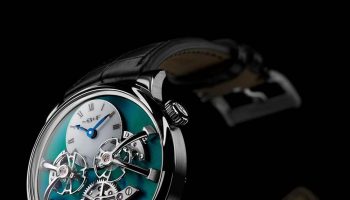